The Grand Hotel in Stockholm

A Truly Grand Hotel in Both Luxury and History.

North Americans will tend to shy away from Sweden (as well as the other Nordic countries) because of the relatively high cost of living in these countries (in other words, you likely won’t see many Bookit coupon promotions for vacations to Sweden). But the average American tourist’s loss will be your gain, as Sweden has some amazing sights and experiences. And you won’t have to fight the crowds to see them.

Over a Century of History:

Built by a Frenchman in 1874, Stockholm’s Grand Hotel has been Scandinavia’s premier hotel for more than 150 years. In that time it’s played an important role in the city’s history and has become a Swedish cultural icon that’s hosted artists, foreign dignitaries, world leaders, rock stars and Hollywood actresses. The first Nobel Prize ceremony was celebrated at the Grand in 1901 and today it is still tradition for the laureates to stay at the hotel. During the sixties, The Grand was immortalized in “The Prize”, which was filmed at the hotel and featured Paul Newman as a Nobel-Prize-winning writer who tries to fool a plot to kidnap one of the laureates while running around the hotel and drinking plenty of martinis alongside his posh Swedish sidekick. Nowadays, after almost a century-and-a-half of history, The Grand remains a beacon of luxury, fine dining and the good life in the city of Stockholm.

For a hotel whose interiors have been designated a “Swedish National Treasure”, The Grand does a great job at keeping a firm footing on the 21st century. The hotel’s rich history is tangible yet not museum-like and constant renovations, including one during the past year, have kept it modern, relevant and in excellent shape. Old school opulence, however, is still preserved in the lobby, the bar and the ballrooms. Marble columns, heavy candelabra and rich textiles welcome guests at the hotel’s lobby while the Hall of Mirrors, inspired by the one in Versailles, and the Wintergarden are still as splendorous and magnificent as they were when they welcomed the first batch of Nobel Prize winners more than a century ago. 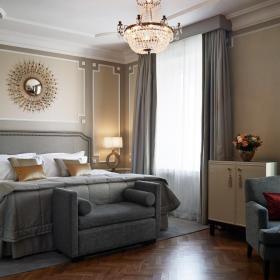 Imagine waking up in this bed.

At The Grand, classic luxury is grounded by sensible modern Scandinavian design in elegant and plush rooms that feature some of the most impressive views in all of Stockholm. The design, layout and amenities of the rooms changes depending on the category and include marble bathrooms in all rooms, saunas in some of the suites, and even a full kitchen and a 12-seater theater at the Princess Lillian Suite. All rooms have varying combinations of classic and contemporary Scandinavian furniture along with rich textiles heavy on monochromatic florals and arabesques that are kept light and airy by cold teals, greys and beiges with warmer accents in greens, golds and reds. Suites include the historic Nobel Suite, which has accommodated the prizewinners for decades; the Flag Suite, featuring a staircase leading up to the highest tower in the hotel crowned by the Swedish flag; and the Princess Lillian Suite, The Grand’s most luxurious suite with panoramic views of the city.

There Are Many Dining Options in the Hotel and Close-By. 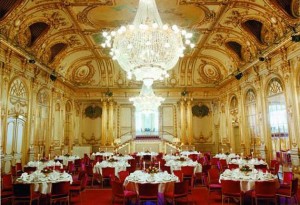 The Grand itself houses the Michelin-starred Mathias Dahlgren, as well as two restaurants overlooking the harbor. It also has a café just a few meters from the water, and one of Stockholm’s most famous bars. The hotel’s most popular restaurant is the Veranda, where guests can enjoy a variety of dining options with views of the waterfront and the Royal Palace. For more than a century, the Veranda has been serving buffets for breakfast, traditional Swedish dishes and smorgasbord for lunch and dinner and themed all-day buffets throughout the year that revolve around seasonal ingredients such as crayfish in the summer and shellfish in the fall. Right outside the hotel is The Terrace with summertime Mediterranean-inspired fare and, further away on the harbor’s edge, is the Grand Café offering a lighter menu of sandwiches and pastries. Adjacent to the lobby, the Cadier Bar serves breakfast, brunch and afternoon tea in addition to expertly mixed drinks by some of Stockholm’s best mixologists.

In the last few years, Michellin-starred Mathias Dahlgren has become The Grand’s front-runner. The restaurtant is comprised of three different concepts: Matsalen, Matbaren and Matbordet; guided under the same philosophy of mixing local and international ingredients and cuisines to create a product that is natural in taste. Matsalen is high-end modern gastronomy eatery while Matbaren is it’s more laid back bistro-style sister with a seasonal menu. Matbordet is not so much of a restaurant as it is an experience in which there is a conversation between the kitchen and the dining room where guests are encouraged to be more than passive onlookers by participating with suggestions and collaborations. These gatherings function as a vital part of Mathias’ test kitchen and are an opportunity for the chef to educate his guests on food, ingredients and the culinary creative process.

The Grand’s spa is founded on the Nordic ideals of wholesomeness, closeness to nature and sustainability. It offers its guests a range of treatments and experiences that include Swedish massages, consults with trained therapists and specialists and the opportunity to indulge in the classic Nordic bathing ritual of steaming in a hot sauna and jumping into a cold pool. Private spa suites are available for a luxurious experience for two or even just one.

Located on the southernmost strip of Norrmalm, The Grand Hotel occupies prime real-estate space in Stockholm’s historic harbor. Shopping in Stureplan, dining in Norrmalm and Östermalm and bar hopping in Södermalm are all just a short drive, walk or bike ride away while Old Town is just across the bridge and the ferries into the Stockholm Archipelago dock a few meters away from the hotel’s entrance. The property has one of the most magnificent views in all of Northern Europe: glimpses of the Royal Palace and Old Town may be caught from the rooms, the bar and the restaurants and a steady stream of ships sailing into and out of the harbor ensure hours of lazy contemplation. In the wintertime, when night falls a little bit after two in the afternoon, you can enjoy the Cadier Bar’s afternoon tea at twilight while watching the sun set over city.

For more than a century, the Grand has been and still is a celebration of history, luxury, good food and the good life. Few hotels in the world have such a high claim to fame and historical importance as Stockholm’s Grand Hotel does and even fewer in the city boast more luxury or a better location.

Luxurious London
Luxury Travel Trends This Year (and Beyond!)
Luxury in Dublin.

← Luxury Travel Trends This Year (and Beyond!)
How Expedia Coupons Give You Affordable Luxury in Barbados. →