The New Dublin Offers a Taste of the Good Life.

Maybe you listened to some tips from WiseInvesting and now have some extra income for a luxury trip. Have you ever thought of Dublin as your next luxury getaway?

When the average traveller thinks of Dublin, they tend to think of pubs, beer and history. Irish descendants from the U.S., Canada and other places across the world will come home to see where they came from…and have a drink on the way.

But in just the past few years, Dublin has been quietly becoming one of the most modern cities in all of Europe. Google and Yahoo have offices in downtown Dublin, and those highly paid engineers want a modern community to live in.

World class facilities in the area have sprung up to cater to the smart, wealthy class of engineers that now live there. We checked out the area by the Grand Canal last month to see what all the fuss was about. We saw that Marker Hotel in downtown Dublin, a sleek modern hotel, had been growing in notoriety in luxury travel forums.

The average cost of a hotel room in the Marker Hotel is a pricey-but-not-too-pricey $350/night. Plus we found some coupon codes from Travelocity that saved us 20% off (I know we’re a luxury blog, but why spend more when you don’t have to?). The hotel has some dapper looking Irish gentleman greet you at the hotel. There was a party going on at the Marker Bar, which is just to the right when you first walk in. It was a lot of smart, well-dressed, good-looking people having drinks. Not your traditional scene when you think of a bar in Dublin.

Bike Along the Grand Canal:

The Marker Hotel sits right along the Grand Canal, where you can got a walk along the seawall, or even rent a bike. It’s wouldn’t be a long bike ride along the lines of NYC or Vancouver’s Stanley Park, but you can definitely soak in a lot of Dublin in just twenty minutes. 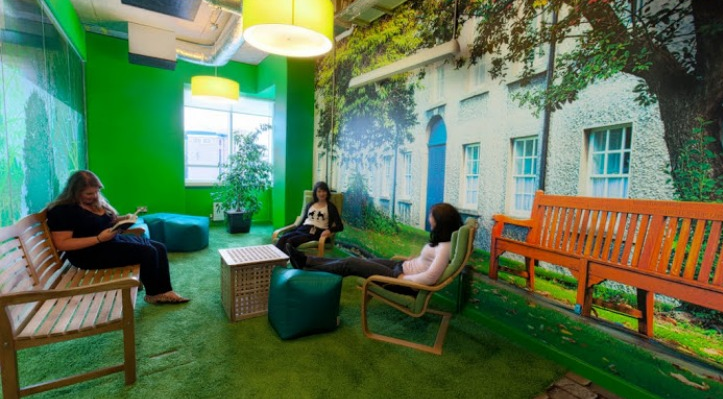 You can learn more about Google’s office here.

Along with the cutting-edge architecture and gentrification along the Grand Canal, you only need to go a few blocks to find centuries-old pubs where famous Irish writers like James Joyce would frequent. There’s even a walking tour you can go on to visit all the famous writerly pubs in Dublin.

Such a stark contrast between the rich history and sleek modernity make Dublin a truly memorable city to visit. There is no gradual evolution in architecture like you’ll find in London. No, Dublin grows in fits and starts, and the contrast definitely sparks the creative juices of your mind.

Best Mai-Tai in Hawaii
Luxury Travel Trends This Year (and Beyond!)
Luxurious London

← Luxury Beverages Around the World
Luxury Travel Trends This Year (and Beyond!) →